The Ashmolean has raised the money needed to acquire a major painting by JMW Turner.

Following the launch, in June, of a public appeal, the Museum has received an extraordinary response from members of the public donating money towards the acquisition of Turner�s painting of 1810, The High Street, Oxford. Supporters have sent in over �60,000, helping the Museum reach the fundraising target in just four weeks. Thank you to everyone who has supported the campaign.

The High Street, Oxford (1810), which has been on loan to the Museum from a private collection since 1997, is Turner's only full size townscape in oils. Over the summer, the painting will remain on display in the Welcome Space on the Museum�s ground floor, and twelve full-size reproductions will also be installed around the city.

A photography competition is also now open and we want to know what your personal view of Oxford looks like. Capture your view of Oxford on camera and share it with us on social media to be in with a chance of winning a variety of prizes, and for your image to go on display at the Ashmolean Museum later this year. Click on the button below to find out more.

Dr Alexander Sturgis, Director of the Ashmolean: �The Museum has been overwhelmed by public support. With well over 800 people contributing to the appeal, it is clear that the local community, as well as visitors to the Museum from across the world, feel that this picture, the greatest painting of the city ever made, must remain on show in a public museum in Oxford.

�We are so grateful to the members of the public who have made donations; to the Heritage Lottery Fund and the Art Fund; and to the Friends and Patrons of the Museum. There are big plans for the painting once we acquire it. It will be lent to regional museums so as many people as possible from the surrounding area will be able to see it; it will be at the heart of a new series of educational activities for schools and young people; and, not least, it will have pride of place in the Museum�s Nineteenth Century Gallery which will be refurbished and reopened in early 2016.�

The Ashmolean still needs your support, so please keep giving to this year�s Appeal to support conservation, collection display and education programmes throughout the Museum. 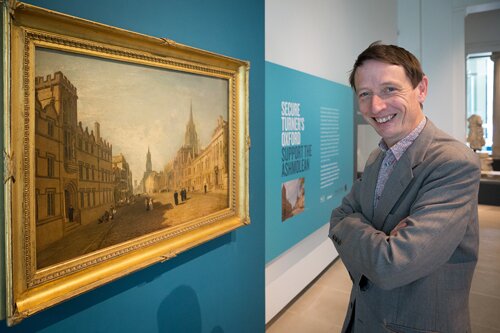 
Stuart McLeod, Head of Heritage Lottery Fund South East England: �This is such fantastic news! We�re delighted that the public and museum visitors have donated so generously and enabled the Ashmolean to meet their target so quickly � this just shows how important this painting is. Congratulations to everyone involved.�

Stephen Deuchar, Director of the Art Fund: �Congratulations to the Ashmolean on the success of their fundraising appeal. It would have been such a tragedy to lose this beautiful and important work by Turner - and clearly the public felt the same. We�re proud to stand alongside everyone who contributed generously to make this happen.�

To find out more please visit our campaign page at www.ashmolean.org/turner

Go to Top of Page

Keep up to date with Ashmolean events, exhibitions and news